History of the Polish parlamentarism may be divided into the following periods: 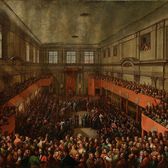 Sejm of the Kingdom of Poland and Polish-Lithuanian Commonwealth

The Polish parliament is one of the earliest legislatures in Europe. It originated from the local gatherings, wiece, called by the feudal rulers of Piast dynasty in their duchies (12th c). The term sejm stems from old Slavic word, meaning “gathering”, and appeared during the time following a unification of the Kingdom of Poland (14/15th c), when those assemblies started to represent people from all over the country. Assembly at Piotrków (1493) is considered to be the first, historical Sejm, consisting of three estates: the King, the Senate (upper chamber) and the House of Deputies (lower chamber).

With the passing of time the number of gentry envoys and their privileges grew regularly. The gentry made up about eight per cent of the whole population and formed the basis of the army. This gave them a political power and strong influence in shaping the law and parliamentary procedure, resulting in severe limitation of king’s power. The final decisions in legislation, taxation, budget, treasury and foreign affairs was reserved to the Sejm; without consent of deputies war couldn’t be waged outside the Polish boundaries, no member of the gentry could be imprisoned without a court verdict (privilege neminem captivabimus 1425), none of the binding laws could be altered without the approval of the Sejm (privilege nihil novi 1505), taxes remained low, and peasant labour on the land of the gentry was compulsory. In 1573, in the act of the Warsaw Confederation, the Sejm officially sanctioned religious tolerance in Commonwealth territory, ensuring refuge from the ongoing Reformation and Counter-Reformation wars.

Until the end of the 16th century, unanimity of deputies was not required, the most common electoral form was the majority-voting process. The bills were proposed to the deputies, who would seek a decision. The Senate didn’t pass decisions. The King heard its counsel and concluded the matter, although his power was restricted if all the speakers opposed the royal proposal. This procedure was reinforced later by the principle liberum veto (Latin for “I freely forbid”). Since the second half of 17th century this privilege became a major obstacle to the Sejm’s work, resulting in paralysis of its legislative functions (any objection to a Sejm resolution automatically caused the rejection of other, previously approved, resolutions). This led to a weakening of the Polish State, and brought the Commonwealth to the brink of collapse.

The Sejm convened in 1788, known as the Great, or Four-Year Sejm, embarked upon the long delayed reforms and enacted several laws, from which the most important was the 3rd of May Constitution (1791), generally regarded as Europe's first and the world's second written national constitution. Constitution provided for a modern bicameral parliament with Deputies representing both the nobility and the burghers. The liberum veto principle was abolished in favour of a majority vote.

These reforms were fundamentally unacceptable to Poland’s neighbours. In 1792 Russia invaded Poland still remaining in a deep political crisis after previous partition of the country (1772), and together with Prussia executed in 1793 the Second Partition of the Commonwealth. The national uprising under the command of Tadeusz Kościuszko ended in failure and in 1795 the final partition was undertaken by three powers: Russia, Prussia and Austria. For over a century Poland ceased to exist on the maps of Europe.

It is estimated that, between 1493 and 1793, sejms were held 240 times, with a debate-time of 44 years. The power enjoyed by the Sejm of the First Republic (up to 1795) was incomparably larger than that of other representative bodies functioning in Europe at that time. 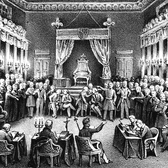 Sejm during the partition era

A Polish State was partially rebuilt by Napoleon Bonaparte as the Duchy of Warsaw (1807-1815). It had a two-chamber assembly that upheld the tradition of the Sejm.

In 1815 the Congress of Vienna set up a semi-autonomous Kingdom of Poland under the Russian protectorate with a bicameral Sejm. During the November Uprising for independence (1830-1831), the assembly, having dethroned the tsar, became the supreme authority of the State till the end of the struggle. Although after the failure of the uprising the Sejm of the Kingdom of Poland was abolished, there were still other Polish parliamentary bodies acting in the annexed territories. The Cracow Republic (proclaimed by the Congress of Vienna) was governed by a Senate and a Representative Assembly (till 1846). A part of the Prussian partition – Grand Duchy of Poznań - also had its own parliament, which was convened twice a year (starting work in 1824). Polish territories under the Austrian rule gained far-reaching autonomy with its own Provincial Sejm of Galicia (1861-1914). Besides the activity in the Polish regional assemblies under the foreign protectorate Polish deputies created national groups in the parliaments of the partitioning powers: in the Prussian Landtag (1848-1918), in the Austrian Council of State (1867-1918), in the Reichstag of the II Reich (1871-1918), and in the Russian Duma and the Council of State (1906-1917).

Sejm and Senate in the Second Republic

Poland regained independence in November 1918 and just a few months later the first parliamentary election was held (January 1919). The first Legislative Sejm began its sittings in February 1919. It quickly adopted a provisional Small (or Minor) Constitution that introduced a parliamentary-republic system.

On March 17, 1921 the Sejm enacted a full constitution. According to this law a bicameral parliament was set up: the lower chamber Sejm with 444 deputies and the upper one, Senate with 111 members, both elected on the basis of proportional representation. The supreme executive power was held by the president elected for seven years by the National Assembly. The political parties acting in the parliament of that period weren’t disciplined enough to face up enormous financial, legal and economic problems with a reconstruction of the State after 123 years under foreign rule. The early “sejms” of the Second Republic were a stage of short-lived coalitions and political crises, which resulted in the coup d’état in May 1926, organized by the former Head of State, Marshal Józef Piłsudski. Two months later an amendment to the constitution was introduced, strengthening the executive and reducing the parliament’s powers. The following decade was the scene of political struggle between the Sejm and government. The conflict culminated in April 1935, when the new constitution was enacted while deputies of the opposition were absent. The new law gave almost dictatorial power to the president, reduced the number of the deputies to 208 and raised the voting age to 24.

It should be noted, that before the 20th century, the term Sejm referred to the entire Polish Parliament (the King, the Senate and the House of Deputies), while since the Second Republic the term refers only to the lower chamber of the parliament. 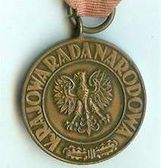 Polish parliament during the war

After German and Soviet invasion of Poland in September 1939 the role of parliament was carried on by the National Council in Exile (London). This assembly was supplemented by an underground Council in occupied Poland, representing all the major political parties acting in conspiracy.

On July 22, 1944 pro-Soviet Polish Committee of National Liberation took over the power in liberated Poland, and declared that it stood by the “basic principles” of the March Constitution of 1921. The Yalta agreements (1945) provided for a free election in Poland as quickly as possible.

Sejm of the People’s Republic of Poland

The election was held in January 1947, but was preceded by the abolition of the Senate on the grounds of the falsified results of the referendum in 1946. The Legislative Sejm of 1947 passed a Small Constitution. In 1952 a full constitution was adopted, which changed the name of the country to the Polish People’s Republic. The Sejm of that period consisted of a single chamber with 460 deputies, who voted on the budget and periodic “national economic plans”, as well as nominated the Prime Minister, the Council of Ministers and members of the State Council (collective head of State). Later, it also chose other government officials, including the head of the Supreme Chamber of Control or the State Tribunal.

Formally, in the years 1952-1989, Sejm was the highest organ of the State power, acting on a basis of the Constitution of July 1952, practically it was submitted to the “leadership role of the Polish United Workers’ Party” and its powers were substituted very often by the State Council. Sejm of that period was deprived of a political representation or a real opposition, it was no more than a facade.

Sejm of the Third Republic

Only in April 1989, as a result of the Round Table Agreement of the government officials with the Solidarity leaders, several changes were accepted in the voting system, structure of the parliament and the future amendments to the constitution. The Senate was reestablished as a tribute to the traditions of Polish parliamentarism. The June election of 1989 was a huge success of the Solidarity movement. The election to the Senate of the first term were first free and democratic election in the post-Second World War Poland. The upper chamber was composed of 99 senators (on 100 possible seats) from the Solidarity list and one independent. In the so called “Contract Sejm” - the lower chamber – all seats available for free election were won by the Solidarity candidates. During that term the Sejm started reforms transforming the country to a fully democratic State and a market economy.

On October 27, 1991 the first truly free election to the Sejm and the Senate was conducted. Sejm of the 1st term passed the bill of the Small Constitution of 1992. Despite the political transformations and factional quarrels between the ruling and the opposition parties a full constitution was enacted in 1997. Nowadays Polish parliament consists of 460 deputies in the Sejm and 100 senators in the Senate, appointed by democratic election every four years. A threshold of at least 5% of votes is used during parliamentary elections.